In this episode, Dr. Hettie V. Williams is in conversation with Dr. Ken Campbell Professor of history at Monmouth University and author of A History of the British Isles: Prehistory to the Present and many other books on British history and beyond about race and the Windrush Generation in England. The Windrush Generation has become a major topic of discussion in the African Diaspora. This phrase refers to the ship MV Empire Windrush which docked in Tilbury June 22, 1948 bringing workers primarily from Jamaica, Trinidad and Tobago, and various other Caribbean Islands to England. Many of the ship’s 492 passengers were children. The University of Oxford estimates that they are among the 500,000 or more UK residents born in Commonwealth countries before 1971.

The opportunities for young adults to succeed and find happiness in today’s world are endless, more so than in any generation prior. So if it’s never been this easy, then why are our 20s so hard? Podcast producer and writer Troy Farkas tries to answer this question with his gues...
Education Self-Improvement

Meet the entrepreneurs in their 20's who are building companies that will shape the future. Weekly episodes range from side hustle ideas to help you build passive income to quit your job or business stories of twenty-somethings having success with their own business.
Business Entrepreneurship

A squad from across the United States riffs about Current Events, Sports, Music, and always UFC.
Comedy

Ideas are the global currency of the 21st century. But how do you come up with one? How do you execute it? How do you operationalize that process and replicate it again and again? We are Creatives, Innovators and Entrepreneurs on a quest to answer these questions and develop a...
Business Entrepreneurship 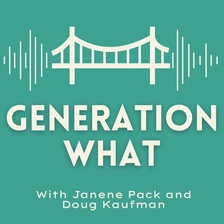 Join the conversation with Branden Berger and Kanika Lal as they discussing the future of drones, Hollywood diversity, and the California drought.
News
00:00
/
00:00