106 OGG - The 2020 Virus Crash, the world is shutting down, keep healthy, cheer up, we will beat this (and, guys, that Kahului final will make you smile!)

Flight 105. Everything you wanted to know (or not know) about the coronavirus (aka Covid19, Sars2, or World War Z) and its short-term effects on the world of air travel — from the hassles to the precaution to think about.

Followed by the fan episode, with longtime listeners Elizabeth, Ed & Dan. Two out of three agree FRA is a disaster (not Elizabeth haha). The Heathrow volunteer program. The battle of the travel apps (and the bizarre TripIt strategy, and UX, as Dan knows very well!). Do you want to win a Dreamliner? Can the BA 350 fly really long routes? SWISS introduces an airline …scent (WTF). American Google translate (and we were hosted at Google, thank you Ed!!!). Ed has seen the future: a robot barista! Someone's been at Southend airport (Elizabeth!). Is there such a thing as too close a livery between airlines? Business premium (no that's not First!) on the Lufthansa 777X. Saving private FlyBe. Willie Walsh leaves IAG. And more avgeekery! The Business of Travel

The Business of Travel is the official podcast of the Global Business Travel Association covering all things related to business travel. Expect weekly episodes each featuring interviews with industry experts and thought leaders on a range of key issues affecting the business trav...
Business Society & Culture Places & Travel

Travel Is Your Business

Travel and hospitality industry professionals get weekly insights from leaders across the business with "TIYB" on their playlists. The series features interviews with thought leaders and innovators changing the face and setting the pace of travel, with a focus on fascinating new...
Society & Culture Places & Travel News Business News Plane & Simple is a unedited, unfiltered podcast that is going to dive into all things business travel from multiple different perspectives. From suppliers, to travel managers, to travel management companies, to road warriors, we will discuss hot topics and the future of travel.
Business Management When there’s more to be said than space and copy deadlines allow, it’s our job at Business Aviation Advisor to get you the information you need, so you can make the most of your aviation investments. And stand by for more online conversations and webinars with BAA contributors. T...
Business News Business News Business Travel On The Fly

Business Travel On the Fly is a monthly podcast that dives into issues affecting those of us who spend time up in the air, out of the office, and away from home on work trips. Whether you’re a seasoned traveler or on your first trip, we will unpack the future of business travel w...
Business Management Technology 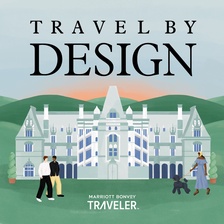 Behind the facade of every world-class hotel, there’s a story waiting to be heard. From a secluded overwater villa in the Maldives, to a rejuvenated royal palace in Budapest, to a trendy hotspot in downtown Los Angeles — join host Hamish Kilburn as he meets the architects, design...
Arts Design Food Society & Culture A travel podcast with Mindie Burgoyne about Ireland - exploring places where the veil between this world and the eternal word is thin.
Society & Culture Places & Travel History
00:00
/
00:00