Augustine on the Meaning of the Cross - CHSS 88

Catholic and Protestant Christians often use the same theological terms such as “faith,” “grace” and “salvation.” But do they understand these terms in the same way?

In this episode, we take some time to think critically about the meaning Catholic theologians have assigned to this term “faith.” We note that Augustine and Thomas Aquinas understood faith to be a theological virtue. By referring to this virtue as “theological,” they understood faith to be a virtue that most directly connects the Christian to God.

Faith, hope and love, both scholars believed, were given to the soul at baptism, the critical moment of the person’s incorporation into the Church, the Body of Christ. With God’s help and with personal initiative, the Christian thereafter exercises each of these theological virtues.

Throughout the Christian life, these theological virtues could be increased, decreased and even eliminated.

The theological virtue of faith, according to Augustine and Thomas Aquinas who followed him, means “to think with assent.” Faith assents to divine revelation.

In addition, these two thinkers likewise understood love to be a desiring of the good for someone else.  Love leads the Christian to take positive action in the world.

Join us this week as we discuss faith, post-baptismal sin and its remedy in the Sacrament of Reconciliation. To comment on this show or to provide feedback, please navigate to https://catholicheritagespirituality.com/episode87/

The Catholic Heritage Spirituality Show is devoted to helping Catholic Christians better understand the history, teachings and culture of their Catholic faith so that they can better love and serve Christ, the Church and their neighbors.

Stay in touch with us! Join our newsletter: https://catholicheritagespirituality.com/podcastnewsletter/ 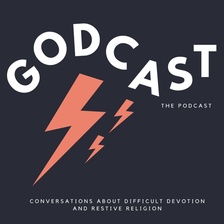 Godcast —Conversations About Religion, Spirituality, and Being

Godcast exists to share our stories about the presence or absence of religion in our lives. Each episode focuses on a particular issue or experience in the hopes of acknowledging that we are in a continued conversation with the religion/ worldview with which we were raised—whethe...
Religion & Spirituality Society & Culture