Lessons in Patience from the Life of Abraham, the Leper and the Good Thief - CHSS 91

A frequent theme in the Gospels is the temptation of triumphalism. At various points in Jesus’ ministry, his audience sought to make him a king or to construe him as a political revolutionary. In John’s gospel (ch. 6), for example, after feeding the multitudes, the author notes that crowds sought to make Jesus a king.

In response to this continual temptation, Jesus resisted such attempts. He even challenged these offers to make him as an earthly monarch by emphasizing the challenges involved in following him.

Jesus throughout the Synoptic Gospels made periodic recourse to the phrase “unless you pick up your cross and follow me, you cannot be my disciple.”   These appeals were meant to discourage, among other things, any temptation to triumphalism among the disciples of Jesus.

Such temptations to triumphalism even made their way among the inner core of Jesus’ followers. The Gospels record various instances of the disciples either seeking self-aggrandizement or seeking to dissuade Jesus from the sufferings of the cross.

To the present day, the temptation to triumphalism persists even in the church. It is very easy for Catholic Christians to be tempted to gloat over those who oppose the Catholic faith.

We discuss the dangers in triumphalism for any genuine Christian spirituality. A triumphalist position stands against the very heart of the Christian’s commitment to following the pattern of Jesus’s life, who described himself as being “meek and humble of heart.”

Join us this week as we discuss the role of triumphalism in the Christian’s spiritual life.

The Catholic Heritage Spirituality Show is devoted to helping Catholic Christians better understand the history, teachings and culture of their Catholic faith so that they can better love and serve Christ, the Church and their neighbors.

Stay in touch with us! Join our newsletter: https://catholicheritagespirituality.com/podcastnewsletter/ We and our Spiritual journeys. Let's together help each other to know better
Religion & Spirituality 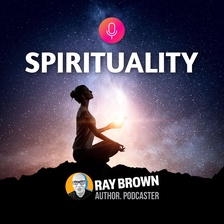 In this podcast, we discuss Spirituality. Spirituality does not mean any particular practice. It is a certain way of being. To get there, there are many things to do. This is like a garden in your house. If the soil, sunlight or stem of a plant is in a certain way, it won’t yield...
Religion & Spirituality Spirituality
00:00
/
00:00