Special guest: Jessica Alexander. Denmark has been voted as having the happiest people in the world by the OECD (Organization for Economic Cooperation and Development) almost every year since 1973. That’s more than 40 years of happiness! It begs the question—is it the parenting? I mean, is there a Danish Way of parenting? It turns out, there is, and while the Danish Way of parenting is not the only reason Danes are the happiest, it does play a very important role—and the success of it all seems to be tied to the ways they educate children far beyond academics—focusing on play, empathy and social skills. It’s important to delve into it, I hope you would agree, since happy kids tend to grow up to be happy adults who raise happy kids—and the seasons go ‘round and round again. And while in the United States and in other areas of the world, we are seeing an increase of anti-depressants, suicides among young people and mental health diagnoses, as well as a great deal of competition between parents and we have a lot to learn from the Danes. Best-selling Author, Journalist, Danish Parenting Expert & Cultural Researcher, Jessica Alexander’s book "The Danish Way of Parenting: What the Happiest People in the World Know about Raising Confident Capable Kids" has been published in over 25 countries. Her work has been featured in TIME, The Wall Street Journal, Salon, Huffington Post, NPR, NY Times, and many more. She regularly does talks and workshops for parents, schools and organizations like Google, The Women's Network of the United Nations, The World Parenting Forum and many more. She has also worked as a spokesperson for LEGO on the Power of play.

The post How to Parent the Danish Way with Jessica Alexander – ReRelease appeared first on drrobynsilverman.com.

The mamas behind the scenes at Kids Who Explore, share weekly episodes covering all things exploring (with kids), from simple walks outside to camping in the backcountry. Expect interviews with explorers from all over the world and lots of takeaways for your own future adventures...
Kids & Family If you want a fun and informative walk for the whole family then this is the place to be! 'Fun Kids Family Walks' is a series of audio tour walks around some amazing places that are 100% free! Our first season is based around London but make sure you subscribe as we'll be addin...
Kids & Family The truth is we are all surviving parenting one day at a time. Add child anxiety or childhood OCD and it can be overwhelming! On The AT Parenting Survival Podcast your host Natasha Daniels will ride the Parental roller coaster with you. She will teach you parenting approaches to... 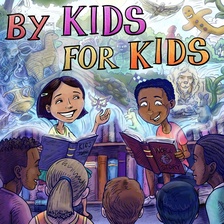 By Kids, For Kids Story Time

Children's stories, presented as audio dramas, performed by kids from across the globe, for kids. Including stories from Hans Christian Anderson, the Grimm Brothers, Greek myths, African folk tales and many more.
Kids & Family Arts Fiction

By Kids, For Kids Story Time

Children's stories, presented as audio dramas, performed by kids from across the globe, for kids. Including stories from Hans Christian Anderson, the Grimm Brothers, Greek myths, African folk tales and many more.
Kids & Family Arts Fiction Kids for the planet

This podcast gives kids a chance to share their opinion. Kids opinions aren’t always welcome in modern times. In this podcast we give everyone a say. We interview many different people on many different subjects.
Kids & Family